It started for me with direct mail.

See, today, my clients do not segment for gender. They send the very same appeal letter to men and women.

But, you have to wonder, could we attract maybe even more giving if our appeals were somehow “gender specific”?

We’re on the threshold of major improvements in donor communications. For instance, direct mail, the acquisition and renewal workhorse, is getting a new engine.

Dr. Adrian Sargeant and Jen Shang are entering their third year of tests on the monetary effects of “extreme donor-centricity” in direct mail appeals. They have a huge US charity as a cooperating partner. Results are encouraging. “Loverized” direct mail without premiums has pulled just as well as premium-enriched appeals — without the gimcracks.

The gender differences in philanthropy go beyond direct mail of course, to high net-worth individual giving.

A report from TD Bank in Canada found that, since 2004, the increase in the number of female donors in Canada has greatly exceeded that of male donors. The report confirms what many major gifts experts have been saying for some time: female donors need to be engaged deeply to unlock their full giving potential, and want to see the impact their gifts make with the cause.

More studies have been done on the subject, The Women’s Philanthropy Institute released a report in 2012, which found that “boomer and older women are more likely to give to charity and give more than their male counterparts when other factors affecting giving are taken into consideration”, despite the fact that boomer women tend to possess less wealth than their male counterparts. 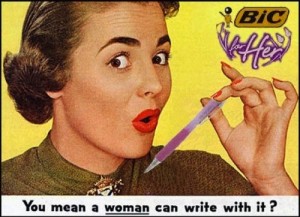 Yet, we need to be careful when targeting female donors. We’ve seen gender based advertising approaches backfire before.  Bic pen released a pen aimed at women, only to have Ellen DeGeneres devote an entire monologue to making fun of the product, which received over 4.5 million views on YouTube.

We’ve also seen it backfire in politics. A recent television commercial aimed at women from “Better Together” (the campaign to keep Scotland in the UK) was a huge failure. The internet has had a field day pointing out the somewhat sexist nature of the commercial.

So, while differences in giving may exist between men and women – to what extent should a charity target communications to those different audiences? We still have some questions, and would love to hear from you:

Tom Ahern is the author of several books on donor communications. Read more about Tom on www.aherncomm.com

Jenny Santi is a philanthropy advisor to some of the world’s most generous givers, celebrity activists, and leading financial institutions in Europe and Asia, helping…

When we asked Helen Upperton to fundraise for MSF Canada, we also offered her the support and guidance of our fundraising and communications teams. I…