Right now I feel like throwing a bucket of ice over the sector we fundraisers work in and shouting “wake up!”.

Years ago I knew something had changed in fundraising. I didn’t know what. Like us all I could see the symptoms such as rising acquisition costs, and falling response rates. I could certainly feel the pressure. So in between jobs I sat and read and read – books like Sticky Marketing, The Networked Non Profit and The New Rules of Marketing and PR. Surfacing from these fantastic reads I knew the rules of fundraising had changed. Over the last three years at SolarAid I have been learning how and doing by best to apply them.

This blog summarises my learning.

Recognising the rules have changed helps you understand the problem (not just the symptoms). And when you know the problem then you can do something about it. It becomes clear what to do, and what to stop. 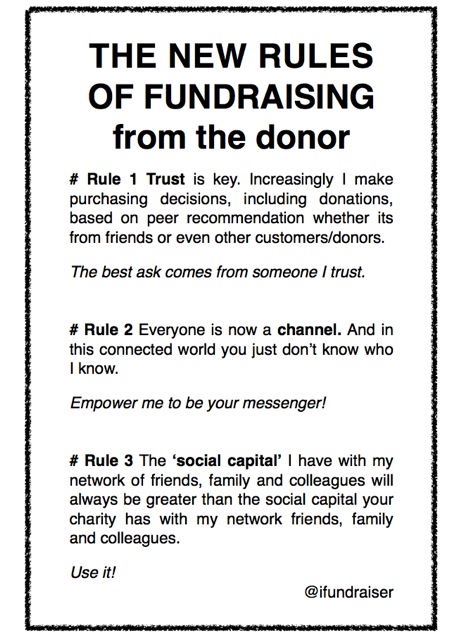 So what are the new rules? These are the three game changers :

Why the rules have changed is the subject of another blog – in a word it’s the internet.

Just stop and think about the first one. How did you last decide on something to buy – that camera you bought, or a place you stayed, or the plumber you chose to use? Chances are it was from a recommendation by asking someone you trust, or going online and looking at the customer re-views.

Let me give you an example of new rules in action in our world of fundraising – this summer’s big hit the Ice Bucket Challenge. When you see it through the lens of the new rules you can see why it works – an ask (the nomination) from someone you know and engaging content produced by your supporters to their friends! Supporters as a channel using their social capital. By the way I drafted this blog post before I even knew about the Ice Bucket Challenge – when I first read about it I could see it through the lens of these new rules.

As a result the short sighted siloed ROI mentality pervades and is dominated by Finance. Whilst this strategy might briefly check the declining trend it doesn’t provide a cure. If anything this approach exacerbates the problem leading to rising public distrust in fundraising. Worse still it leads you to adopt the opposite tactics you need to!

Need more evidence this applies to fundraising? New Philanthropy Capital recently published re-search on giving behaviours in its Money for Good report. The two top reasons a donor earning over £100k chose to give to a specific charity was from a recommendation by a friend, family or colleague or to sponsor a friend, family, or colleague. The top two! And these were the top two reasons for everyone else only after being an existing donor!

How can we not think this profoundly changes our marketing strategies!

So what does this means for fundraising right now?

Applying the new rules to fundraising

So that’s what we should stop. What should we be doing a lot more of according to the new rules?

The key to unlocking the new rules is how to get as many of your supporters engaging their net-works – that includes your staff, volunteers, trustees, beneficiaries and donors.

Now step back and see how your fundraising programme all connects to deliver the best overall ROI and join it up. Think holistic fundraising.

Last year SolarAid’s income just grew by 100% in just one year. We didn’t do this by bombarding people using the old rules (we couldn’t afford to). Examples include a former volunteer who se-cured a six figure trust grant, a donor who recruited others in her street, a major supporter who en-gaged government, a supplier who recommended us to a major donor, and another cause who promoted our appeal to their supporters. And this is just the beginning.

Using the new rules is transformative. But to make them work you need to invest time, resources and brain capacity to make the switch. The savings you make from not applying the old rules will more than compensate. You will need to work out new measures and you need to stop the old measures as they keep you applying the old rules. You may need to think of new ways of working. At SolarAid I have a role as Chief Fundraiser give me the freedom to see how it all connects.

It’s so obvious but you have to recognise what the problem is and then the solution is so much more straightforward. Look at old rule ways and either drop them or adapt them to the new rules. It’s so easy when you can see.

Why we need to wake up

If we continue to do the old rules it will just get people’s backs up. I can’t decide if that’s better for those of us applying the new rules as we will scoop the rewards, or could just mess it up for all of us as reputation and public trust in charities slides. To begin with probably the former but, in time, the latter is a genuine threat. The more of us that try the new rules the more we will learn.

If you are already using the new rules and learning how to apply them then “hurrah!” – please tell me. I would love to know what you are up to. Email [email protected] or comment on this post.

~Numerous Jedi Masters have translated this post from Yoda’s unique way of speaking to improve reading ease.~ There is much Dark Side fundraising being done…

When we asked Helen Upperton to fundraise for MSF Canada, we also offered her the support and guidance of our fundraising and communications teams. I…